The Fred Jones Jr. Museum of Art is a long-standing part of the Norman, Oklahoma landscape. But just because something has been around for a long time, doesn’t mean that everyone knows everything about it.

Here are 4 things you might not know about the Fred Jones Jr. Museum of Art…

The Fred Jones Jr. Museum of Art dates back to the 1920s, when Oscar B. Jacobson (1882–1966) began collecting art for the University of Oklahoma (OU) long before the art museum was established on the Norman campus. Jacobson, who was both a painter and the director of the OU School of Art, thought that firsthand contact with original works of art was a vital part of any well-rounded education.

The museum was opened in 1936 by Prof. Oscar Jacobson. His dream was to build an art department which would nurture its students.

Before this museum and art department were started, the closest museum was in St. Louis. The school was also scarce on art supplies. None of this deterred Prof. Jacobson. And the museum was originally housed in a hall that bore his name.

In memory of their son, Fred Jones, Jr., Mr. and Mrs. Fred Jones of Oklahoma City contributed cash for the construction of a museum building on campus in 1971. During his senior year at OU, Jones was piloting an airplane and the aircraft crashed. He was a World War II veteran who was majoring in business administration.

The Fred Jones Jr. Museum of Art at the University of Oklahoma has nearly 17,000 pieces in its permanent collection. From the 16th century to the present, the museum’s collection includes French Impressionism, 20th-century American painting and sculpture, traditional and contemporary Native American art, Southwest art, pottery, photography, contemporary art, Asian art, and graphics.

According to Wikipedia, the museum’s main collections include:

In addition to the museum’s permanent collections, the art of various periods and cultures can be seen in temporary exhibitions throughout the year.

The Weitzenhoffer Collection of French Impressionism was donated to the museum in 2000. The museum was expanded in 2003 with the building of a new wing, which was completed in 2005. The new “hut-like” wing, which was designed by Washington, D.C., doubled the museum’s size and is named in honor of Mary and Howard Lester of San Francisco.

The museum’s current exhibition space is approximately 40,000 sqft with the recent additions of the Lester Wing (2005) and Stuart Wing (2011). 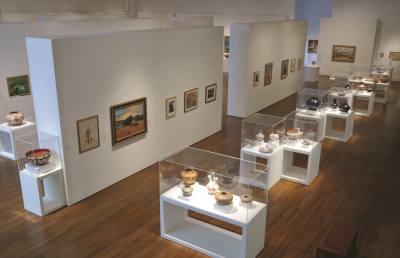 4. Admission to the Fred Jones Jr. Museum of Art is Free

Admission to the museum is complimentary, thanks to the generous support of the Office of the President and the University of Oklahoma Athletics Department.

In a first-of-its-kind relationship between the art department and the athletic department at OU, the museum offers free admission now and will do so into perpetuity. What a great community of supporting one another!

Where Should You Stay When Visiting the Fred Jones Jr Museum?

Experiencing art and culture at the Fred Jones Jr Museum is sure to be a great adventure. You’ll be able to travel the world through the amazing art on display, all while never leaving the ground in Norman Oklahoma.

If you are interested in viewing the amazing art at the Fred Jones Jr Museum, the best Norman OK bed and breakfast is the Montford Inn. Located within walking distance of the museum’s location on the University of Oklahoma main campus, Montford Inn offers a one-of-a-kind guest experience, including a gourmet homemade breakfast and yummy afternoon/evening snacks.

What Else is There to Do in Norman OK?

Located just a few blocks away on the campus of OU, the Sam Noble Oklahoma Museum of Natural History offers additional opportunities for history and cultural experiences. One of the best college towns in America, Norman OK also has a theater and casinos that offer entertainment.

Along with art and history museums, there’s a variety of great things to do in Norman Oklahoma for individuals of any age and activity preference. The city even has several breweries and wineries that are a great addition to any weekend getaway.